I’m not worried about germs. I wash my hands, but that didn’t really take off until I was an adult.

If something drops on the floor/ground/wherever gravity takes it, I’ll still eat it or give it back to Baby Bop.

When she was a newborn, I was hyper vigilant, but then Baby Bop became obsessed with shoes. One day she had Captain’s work shoe in her mouth, he says,

“Nothing like chewing on the laces that were dragging around the mens’ urinal today.”

Gross. But the dog is licking his butt and licking her face, why should I be worried about shoes?

Now Baby Bop has a bad case of the runs. No big deal except her butt doesn’t agree. It’s super red and sore. So sore that she cries when I hold her on my hip. That’s breaking my heart.

The doctor suggests some diaper free time. This is great in theory. We did lots of diaper free time when Baby Bop was 4 months old and liked to lie in one place / couldn’t move if she wanted to. Now if I put my fitbit on Baby Bop, she’d clock the daily 10,000 steps before morning snack. The idea of doing that diaperless is perplexing.

We give it a go. Seeing Baby Bop’s butt bouncing around the house is super cute. She squats down to pick up a toy. First round of poop on the rug. We clean up and resume.

Then it’s a big puddle of pee in the kitchen. I dash for a towel, but Booker gets there first and laps it all up. Gross, but super helpful.

Then it’s another big slop of poop in the kitchen. This is all within 30 minutes. Before I know what’s happening, Booker eats it all. As long as he doesn’t throw up later, this is perfect.

I find another stray pile of poop and point it out to Booker. Special treat for doggies!

Baby Bop poops on one of her toys. Booker to the rescue. Captain looks like he’s going to faint. He tells Booker,

“You better not kiss me later.”

We start chatting about our anniversary and the weekend we met. I didn’t know there could be any new details we hadn’t talked about. Captain says,

“I remember I was drinking a water. I asked you if I could get you a drink and you said water would be good. I was going to go get you one, but you said you’d just drink mine.”

“I don’t remember this at all.”

“I thought, who is this woman who drinks other people’s drinks?”

“Never mind that I was hoping to make out with you.”

Here we are. Wedded bliss. Watching our dog eat our daughter’s diarrhea. 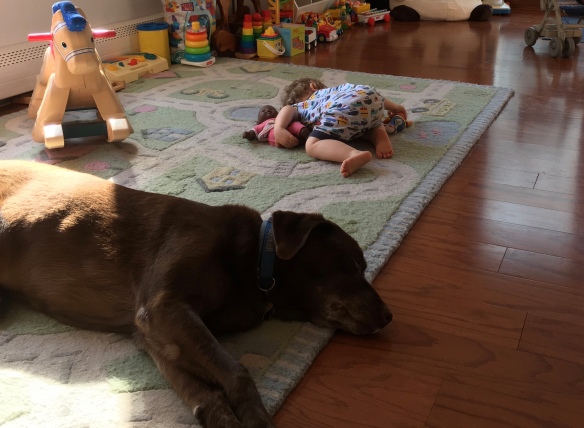 4 thoughts on “Bummin around”