Captain’s brother went to a Cougar den the other night. He tells us,

“This bar is renowned for its cougars. Manthers too.”

“Manthers! I haven’t heard that before.”

He’ll be forty any day now.

Captain’s brother goes on to describe a woman hitting on him at the bar. He says,

“But she wasn’t even a cougar, she was in her sixties.”

He thinks for a minute, 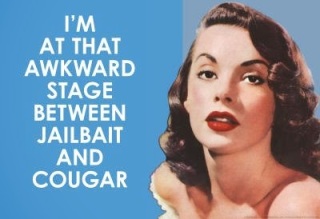