25 weeks pregnant. I’m getting bigger. Theoretically I understand that I will continue to get bigger until I don’t have an extra person inside of me. Realistically, every few days I’m shocked to see that every part of my body is sticking out more.

This lack of control over my body reminds me of puberty, especially as I discuss it with my Little Sister. She tells me,

“None of my clothes fit anymore.”

I just had to buy a bunch of new underwear. This hurts me because I love underwear. In the past 15 years I have collected over 200 pairs. Some wear out, but for the most part all of my favorites are still around. I occasionally add a few more pairs. Nothing major, but I can’t resist a cute thong with penguins, hot dogs or ice cream cones.

Now faced with needing a bigger size and somewhat concerned about how ice cream cone thongs hold up to pregnancy and postpartum, I’ve made a smart, boring investment in a bunch of plain black underwears.

It does save time. In the morning I’m not wavering between snowflake, seahorse or superman undies. The sooner I pick out my underwear, the sooner I’m sitting on my couch blogging about my underwear.

And for the record, I do own all the underwear variations I’ve named.

I mention my new larger size to Captain. He exclaims,

“Did you get granny panties?”

I hold them up.

“Oh those are cute boy shorts.”

The amount of coverage between the two seems very similar.

I tell my Little Sister,

“Yes! I just had to buy bigger underwear.” 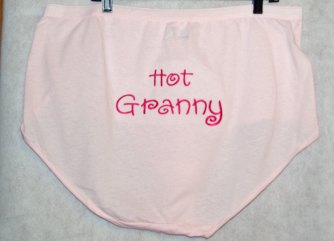