Baby Bop and I are weaned. Freedom! And a week of weeping and the most painful breasts I’ve ever had. I sob on Captain’s shoulder,

She’s 20 months old. If I can still say her age in months, I know she’s not grown up, BUT STILL.

Captain rubs my back and asks,

“What’s going to happen when she leaves for college?”

I sob some more.

I never had any idea how long I’d nurse for. When Baby Bop was born I was hoping it would work. It worked for a couple months. Then around the third month I had to stand and bounce her in a sling to nurse or do all nursing in the middle of the night. It was so intense I was sure I was going crazy.

I stopped the bouncing and night nursing at 12 months. Either she figures it out or we’re done because if I bounce her one more time I might throw her out the window.

She figured it out. Lying in bed, nursing my baby felt so easy, why stop now? So on we went. Then around 17 months I felt like it would be nice to stop, but was terrified of screwing up her beautiful sleeping.

At 18 months she screwed it up all by herself. So at 20 months with her still not sleeping well and nothing to lose, I went for the wean.

She never asks to nurse unless we’re near a bed, so avoiding beds works for most of the day.

We went from 3 feeds a day, to 2 and then our nap time feeding was the last one. I was terrified. Her nap is what helps me survive the day. Faced with not napping you could probably convince me to nurse her until she’s 5.

I gave it a go. First nap without nursing I didn’t whip a boob out and she didn’t ask. Next few naps she asked, cried a little, sighed and drank milk from a sippy cup. Two weeks later, she seems like she’s forgotten she ever nursed. Then without thinking, I slip out of my jammies to get dressed. Baby Bop declares,

Shoot! I hide in my closet.

Is she bargaining with me? Now we’re three weeks weaned and almost ready for college. 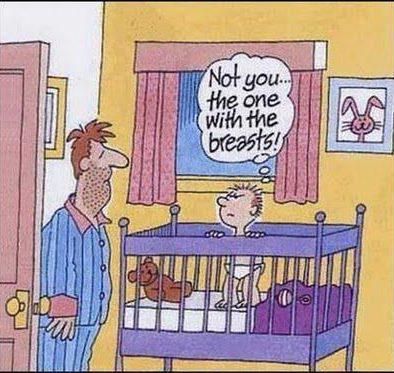