Happy New Year! I’ll be lucky if I’m awake to see midnight. And awake because I woke up to go to the bathroom doesn’t count. Six years ago I would’ve been wide awake bartending. I still can’t believe I start my mornings very close to when I used to go to bed.

Captain has deemed Christmas a success and I’m relieved it’s over. I didn’t realize how relieved I was until December 26th when I ran around like a crazy person and by the time I went to sleep all the decorations were put away and the tree was in a heap in the yard. The only signs of the season now are a couple snowflake towels floating around.

Okay there are also some melamine plates with dogs in glasses and Santa hats.

I’m still not sure how I feel about this whole Santa thing. I grew up knowing he wasn’t real. I remember scoffing at the kids who believed in him, while simultaneously taking the Tooth Fairy very seriously.

I also never believed in the Easter Bunny, but one Easter we were away at the Ritz in Chicago and they promised the Easter Bunny would visit our room. My parents wanted to head out for the day. I was frantic. I called the front desk and pestered them for the whereabouts of this bunny, never for a second letting them believe I had any doubts about his existence. Please just bring me a basket of candy.

I thought having the Tooth Fairy was fun, so might as well do Santa. BB seemed to grasp the idea that Hanukkah presents come from Mom and Dad and Christmas ones come from Santa. I thought this would be an easy enough year, but BB is already trying to poke holes in my Santa story and I haven’t had a chance to get my story straight.

We were headed to a holiday party to see Santa. I mention this to BB. She asks,

“We’re going to the North Pole?”

No. What? Good point. How the heck do kids make sense of the million Santas walking around at Christmas time? Having worked in Disney, I know they let nothing threaten the magic. You will NEVER have a double Mickey Mouse sighting because there’s only one Mickey of course.

But nobody is monitoring all the Santas. I can’t even remember what I told BB. When we get there she asks,

“Where are Santa’s reindeer?”

That’s it. Uncle! I’m tempted to tell her I made a big mistake and Santa isn’t real. Santa terrifies her. Later when we read some books, she points at Santa’s elves and tells me,

“I like the little Santas, not the big Santa.”

She also asked me,

“How does Tutu (our Elf on the Shelf) fly? She doesn’t have wings.”

Is that the right answer? I know the Elf on the Shelf website provides answers to potential questions, but when BB put me on the spot I panicked.

If I can’t field the two-year-old questions, how the heck am I supposed to carry this story until the marginal age of 7?

It also dawns on me that Santa needs his own wrapping paper and hand writing. I get a pass on that this year. The only letter BB cares about is the first letter of her name.

Christmas Eve I absolutely regretted the entire thing. BB was sitting up in bed terrified and she kept pointing to the roof,

“Are the reindeer up there?”

“No.” If Santa keeps BB from sleeping I’m going to be really angry with this guy.

She sleeps. In the morning she comes tearing down the stairs and comes to an abrupt halt in the kitchen. She gasps when she sees her presents,

“A tractor! I told Santa I wanted a tractor!” And then she whispers, “Is he in there?”

She won’t move. Captain has to hold her hand and we proceed with caution. The coast is clear, Santa is back at the North Pole, until next year! 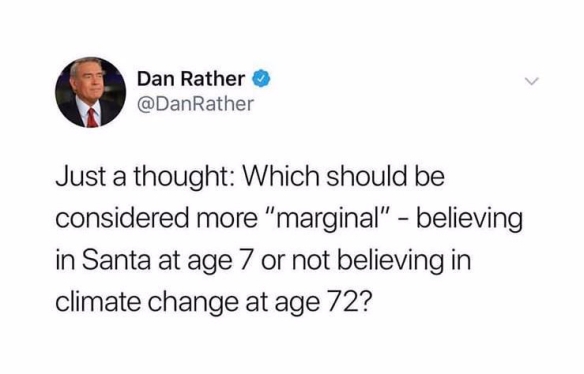