Everyone says you’re so exhausted by the end of it all, “it all” being the wedding. My body was tired. There’s only so much dancing in an 8 pound dress you can do. But mentally I was wired. I managed to go to sleep only to pop back up again at 6am ready to go.

Breakfast, pack and then off to the airport. Greece here we come. Captain’s ring keeps catching my eye. I’m with a married man! Seventeen travel hours later we arrive in Santorini. The taxi drops us off in a parking lot. Two guys pick up our bags and say,

It’s dark, there’s nothing nearby that looks like a honeymoon suite and two strange men are disappearing with our bags. I hustle to keep up. There are many flights of stairs. We’re losing ground on our bags.

We descend over the peak of a cliff and what we can’t see in the dark is our hotel, dug into the side of a cliff with the Aegean Sea stretching out to the horizon. We go to bed.

Two days later we put some clothes on and book an ELECTRIC mountain bike tour. I don’t know if you’ve ever tried one of these before, but it was amazing. It involves very little actual bicycle riding.

Next we rented a car. It was like a lawnmower for two. Later that night, strolling back to the hotel along the beach after a romantic dinner, Captain sighs,

Don’t worry, they’re waiting for you.

Captain’s honeymoon to-do list included a trip to the nude beach, so off we went. I’m glad we did it, but unless you’ve spent every summer of your life in a nudist colony, there’s a decent amount of concern for sun damage to one’s bits.

With our bits full of sunscreen, we’re finally able to relax. Two weeks later, it’s time to head home and get started on 30+ years of married blogging. 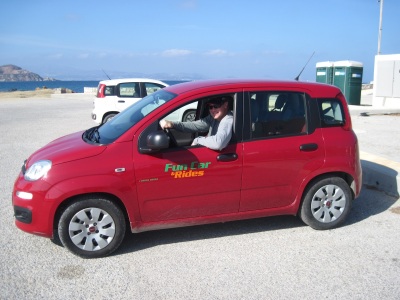 3 thoughts on “It’s not a honeymoon if there’s no skinny dipping. Don’t worry, we wore sunscreen”