So after all that, Baby Bop’s glasses are a non-issue. She wears them 90% of the time. What I didn’t anticipate is how often I’d have to wash them. When she’s tired, instead of rubbing her eyes, she rubs her glasses. She loves a big ol’ slobber from Booker and he sees no reason to avoid her glasses.

Food on her fingers? Rub it on the glasses. Singing “Head, shoulders, knees and toes?” Smear fingers all over glasses. Demand that Mommy and Dadda wear their glasses? Inspect her glasses. And I knew I was cleaning them constantly when on the second day of wearing them, Baby Bop was “washing” them in her sink.

Now the best part is that Captain doesn’t want to wear his $8 fashion pair, but Baby Bop isn’t going to stand for that. She sees him without them and she declares,

And really how can he argue with that?

I’m tired of wearing mine too. Baby Bop seems to be the only one who’s NOT struggling with glasses. Her and Cookie Monster.

So really all my anticipation about how Baby Bop was going to manage, should’ve been directed toward how Captain and I are going to manage. And it’s a new aesthetic to get used to too. The full head strap that keeps her glasses on her head is very necessary, but not great for her baby mullet.

Her hair could use a trim from someone besides me, despite how much I’ve tried to learn from YouTube.

Captain watches a YouTube video on changing our dryer vent from the back to the side and he does it in the tiny bathroom, in a few hours, on the first try.

I watch a YouTube video on trimming bangs, and after 5 or 6 separate attempts over the past year, I’ve yet to be happy with the outcome. It’s always a case of,

Oops, a little uneven, I’ll take some more from this side.

Gah! I need more from the other side.

I give up. I have to stop or else there won’t be any bangs left. A couple months go by and I get to try again. We’re at the point of me trying again or paying $20 for the pleasure of torturing her at a salon and hoping I can immobilize her long enough for them to do it.

I’m leaning toward the torture.

But yay for seeing! And Baby Bop likes what she sees. The first time she looked in the mirror with her glasses she stared at herself for a long time and kept turning from side to side. Then she gave a big smile and said, 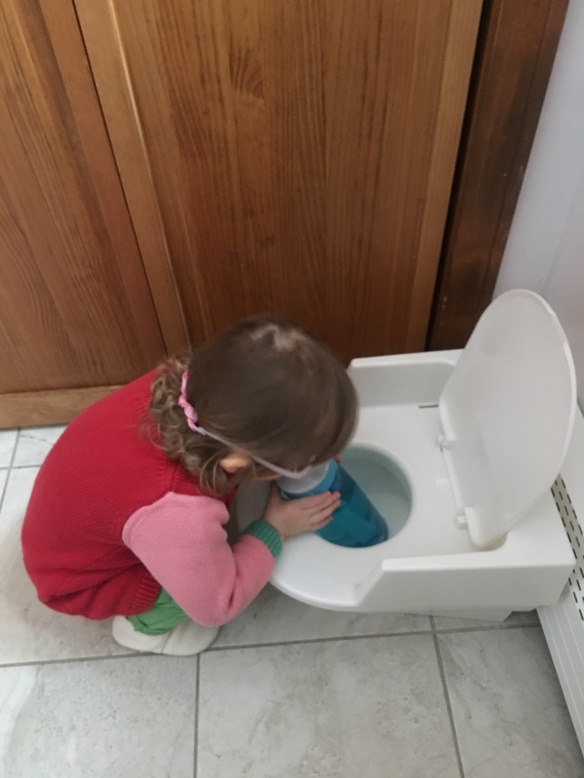