Tell me about it.

We’ve been screwed up for 6 weeks. For the past 3 weeks we just maintained status quo, i.e. bed sharing so we could save our sanity because we knew going away would negate any progress.

We went skiing in Killington. Skiing was awesome. We all got the Norovirus. So that was the worst. But if I have to have a puking toddler, being in a hotel room that I’ll never smell again is not a terrible idea.

Now we’re home, feeling better and still not sleeping great. Except now Baby Bop is used to sleeping with both of us and not just one. She woke up screaming even though I was right next to her and kept saying,

I settle her down and she reaches her arm out for where Captain was when we were on vacation. We were in a queen bed, so we were on top of each other.

At any given moment Baby Bop’s head was on Captain and her feet were on me. Or vice versa. Feet sound preferable because they don’t weigh as much as her head, but you’d rethink that when there’s a foot doing leg presses against your jaw.

“I think we should wash her bunnies.”

The only reason I wasn’t washing them, was because she was sleeping through the night. No point in keeping vomit-scented bunnies now.

I wash one at a time. She’s attached to two. There’s a third, untouched, entirely new back-up bunny on the shelf. While one is in the wash Baby Bop asks for her bunnies. I hand her one of her usual ones. She tells me,

“Yes. We only have one right now.”

She points to the brand new one on the shelf.

Hard to argue with that. I hand it to her. She looks at it. Looks at me. Takes a big sniff and wrinkles her forehead in consternation. It smells way too clean. She says,

She gives me a look like she wants me to know I’m not pulling one over on her and gives the new bunny a hug.

Now both bunnies are washed and the new one is stored out of sight. She tried to have three. When I emerge from her room with the new bunny, Captain says,

“I’m not having her attached to 3 bunnies.” Then I’d have to buy 3 more bunnies to have back-ups and that would run us up another $120. Sleep may be out of control, but I’m standing my ground with the bunnies. 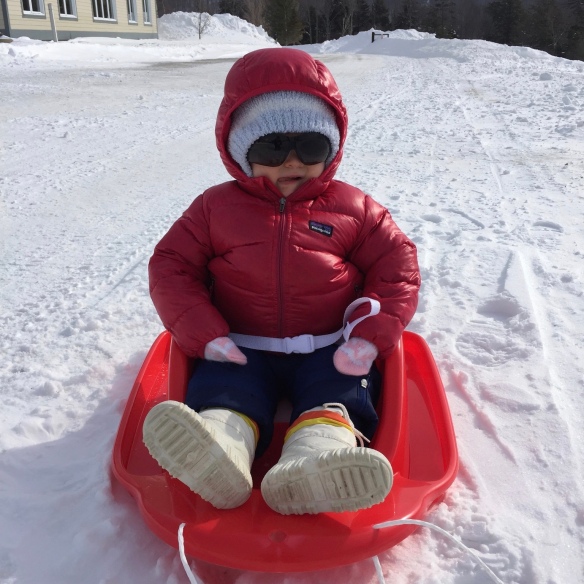